Cheap Digital Voice Recorders You May Already Own

In contrast to the $300 digital voice recorders that have been previously discussed on Missionary Geek, here are some ways to use inexpensive digital voice recorders you may already own to get your needed recordings. Not every job requires hundreds of dollars worth of equipment. It is possible to use your cell phone to record a sermon or a language lesson for absolutely no cost. It may even be more practical to do so.

Many cell phones have a voice recorder built in. You need to learn the limitations of this feature in your phone before you entrust it to an important recording. Many feature phones will only allow you to record a few seconds or a couple of minutes in each voice memo. This may make it impractical for use in recording a lecture, but perfect for recording language snippets when trying to learn a new sound.

Ensure that you can get the recording off the phone to your computer if needed. If you will only be listening to the recording through your phone, then you won’t need to worry about transferring it to your computer. However, if you need the recording or voice memo so that you can include it with a video or attach it to an email, you need to make sure that it can be transferred and that it is in a format that other people can play back. Many cell phones record in a proprietary and compressed format that must be converted to be useful. The conversion process may degrade the quality of the recording even further. 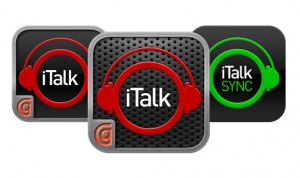 If you have a smartphone like an iOS (Apple) or Android device, there are applications that are specially designed for getting decent recordings from your phone.

For the Apple iPhone there is an app from Griffin Technologies called iTalk. This application allows the user to record as long as there is space available on the device. There are three recording qualities that lets you choose a higher quality at the cost of more required drive space. There is a free, ad supported, version and a version which costs $1.99. Besides being able to email the recordings to yourself, you can use their iTalk Sync software or Dropbox to move the files from the phone to your computer.

For Android users there is the TapeMachine application which lets you not only choose record quality, but also the file type that you would like to use in your recording. The choices are WAV, AIFF, FLAC, OGG, and MP3. There is limited sound editing you can do on the device through the application. This application costs less than $6 in the Android Marketplace.

Many MP3 players have digital voice recording features built into the player. Certainly not all of them do, but it may be worth checking the one you own to see if it is a hidden feature you did not know about. Most of the MP3 players that have this feature don’t offer much more than basic recording, but some come with the ability to record using a high quality external microphone. Most of the Missionary Talks interviews have been recorded on an old iRiver iFP-890 using an external microphone.

An MP3 player/recorder may be entirely free since you may already own the device. There are plenty available on Amazon for under $25.

There are a couple of compelling features to using an MP3 player as a recorder. First is that most of these recorders will record into the MP3 format which all computers can play back and manipulate. The sound quality won’t be as good as a device that can record in WAV, but at least it will be compatible. The second great feature about MP3 players is that the vast majority of them can be viewed as a external mass storage device. Your computer will not have to use specialty software to transfer the files from the recorder to the computer (except for Apple iPods and iPhones).

When treading into the waters of dedicated digital voice recorders, you need to do some careful research. Many of the lower priced items make it difficult to get the recording out of the device. Or, they use a proprietary sound file that requires you to have special software to manipulate the files. Read product reviews and ask as many questions as you need to ensure that you are getting the features you want.

Certainly the recommendation is that you use a phone or MP3 player/recorder since these are most likely to be the cheapest options you have. If you are going to spend enough to get a good dedicated digital voice recorder, you may want to consider spending a few dollars more to get one that will allow an external mic and ensure that the recordings will be easy to get off the device.

There is something that is often talked about when discussing digital cameras—the best camera is the one that you will carry with you and have available at all times. Having a $4000 camera does no good if you are afraid to take it outside and use it. In that case a 1 megapixel camera phone will yield better results than a 24 megapixel dSLR. The same is true for a digital recorder. Certainly there are some very attractive recorders at the $300 price point, but if you never carry it with you, then the phone that is in your pocket will get better recordings than a Zoom H4n with external mics.

1 Trackback or Pingback for this entry