Which is the Best Web Browser 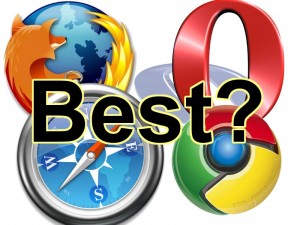 Different Browsers
There are many more browsers than I will mention here, but let’s just look at some of the big names: Firefox, Chrome, Safari, Internet Explorer and Opera. They each have their own characteristics and selling points. There is no reason to limit yourself to just one browser. While you can probably choose one for most needs, there are some times where one browser will be much better for a job than another one.

Firefox
Firefox has been my browser of choice for many years, even before it was called Firefox. It has been more standards compliant in many areas than other browsers. Like some of the other browsers in the list, Firefox has add-ons, or extensions, that give the browser more capabilities than what was originally planned by the browser maker. This allows Mozilla, the makers of Firefox, to make a streamlined browser that renders pages well while allowing the user to add the specific functionality that he wants.

For the last several years web savvy designers have made their websites streamlined for Firefox. I have some websites that I visit regularly that do not work well in any other browser. Firefox has done a great job at balancing innovation and keeping things working with standard technology.

Here is an interesting side note. Firefox is based off the Gecko engine which was developed by the makers of the Konqueror web browser (for Linux) which happens to be on my list of absolute worst browsers available. The same engine powers one of the best and one of the worst.

Chrome
Chrome is made by Google and is based on the WebKit engine that Apple, Inc. developed for the Safari browser. Chrome has been super fast for me. While I said that Firefox has been my browser of choice for many years, it has been replaced recently by Chrome as my default browser. Many of the features I enjoy with Firefox are available on Chrome. Chrome has extensions that add functionality to the browser. There are not as many extensions available for Chrome yet as there are for Firefox. Chrome works on almost every website that I frequent—except those specifically written for Firefox.

I don’t mind keeping Firefox around even though I mostly use Chrome. They are both great browsers and the two I highly recommend. Particularly for their Christian friendliness.

Safari
Safari is a browser that I have not used much. It has the same underlying engine that Chrome has. It is available on Windows and Mac, but not for Linux. Firefox and Chrome both work well on Linux.

Safari has some great features, but it seems that every time they come out with something that is good, Chrome releases an update that either copies or does the feature just a bit better. Since they are built on the same base, it is easy for them to have similar feature sets.

There are times on my wife’s Mac computer that a website will not work quite right in Firefox. Safari steps in to the rescue then. This is particularly true when the site needs to control a piece of hardware such as the webcam.

Internet Explorer
Internet Explorer is only available for Windows. However, even if it were available for Linux I would not be interested in using it. Many of the security flaws that Windows has are a result of Internet Explorer. I do not recommend IE to anyone. That does not mean, however, that you can get rid of it from your computer. While Windows makes it possible to hide it, there are times on certain Microsoft websites where you need IE. Certain security updates require that they be installed through the IE browser.

Opera
Opera is a browser that has been around for many years and has a very loyal following. They recently announced that they will have extensions available in their next release, even though Firefox has had them available for most of a decade. Every time I try Opera I give it a fair shake for several days, but I never can get used to the way it does things. While it is not my choice for a browser, I have nothing against it.

Christian Friendly?
How can a browser be Christian friendly? Both Firefox and Chrome have extensions that allow you to block advertisements from websites. Using these browsers with the ad blocking extensions in them, I never see any ads that I have not expressly said I wanted to see. [Adblock Plus for Firefox, and AdBlock for Chrome]

I understand that websites make money by showing advertisements. I also understand that there are some services that are able to make their products available for free because of the ads. However, I choose not to fill my eyes with the ads that I know are out there. I have been shocked when surfing to certain websites on other people’s computers when I see the ads that are being shown because I never see them on my machine. I understand why people think the Internet is such a wicked place. If I had to look at those ads all the time, I would probably avoid many of the good things the Internet has to offer too.

Which is the Best Browser?
Obviously I have a preference for Firefox and Chrome because they work so well and have ad blocking available. Opera, with it’s new ability to have extensions, may soon come out with ad blocking. The same AdBlock extension for Chrome is available for Safari, but I have not used it. I cannot at all recommend Internet Explorer.

These are just my thoughts on the browser market. What browser do you use and why?

27 Comments for this entry